On this page, you can get familiar with basic information that helps you start working with TestFLO.

This issue is a non-executable test specification which covers a requirement. It contains test steps and does not allow you to set statuses of the steps. It’s a template out of which you will create a executable test cases. Test Case Templates can reside in separate Jira projects and serve as a reusable test repository organized into a tree of test folders. A Test Case Template does not need to have a parent issue, it can exist independently on its own.

This issue is an executable instance created from a Test Case Template. The testers can set steps' statuses on Test Cases, and each Test Case needs to have a Test Plan as its parent issue. Test Cases represent either manual work to be done, or results of automated test runs. Those Test Cases which have not yet started being executed can be updated on demand if their Test Case Template changes, they can also be updated based on changes in the Test Plan.

This issue contains a number of Test Cases to be executed, and can enforce the order of their execution if needed. Test Cases can be further split into groups within one Test Plan. Test Plans can be created manually or out of test repository folders containing Test Case Templates, and reflect the test repository folder structure in the form of Test Case groups. Test Plans can cover requirements, and exist independently without a parent issue. Test Plans can be used for triggering automated tests on the CI server, and test results are then translated automatically into passed or failed test cases.

This issue is an optional issue type which groups Test Plans, and allows to get a bird’s eye view on all your test efforts heading towards a shared goal. For example, if a company producing smart home systems wants to introduce a new sensor, it needs to test the hardware, but also their mobile app and web app that will show the data from the new sensor. This can lead to the mobile app testers creating their test plan, and the web app and hardware teams their separate test plans, each with their own workflow, if needed. Then, the Master Test Plan groups all underlying Test Plans and allows to track progress on the test efforts heading towards the introduction of the new sensor.

Learn more about MTP configuration in the How to create a Master Test Plan article.

In TestFLO 9.0, the Master Test Plan will become a standard feature of the the app. Check our Roadmap.


Bear in mind TestFLO’s entities are Jira issues, so you show them on Kanban or Scrum boards, and also use JQL to search for them and show them in gadgets on Jira dashboards.

TestFLO can treat any existing or newly created Jira issue type as a requirement, or a defect. Requirements and defects can reside in any Jira project, either external to the one where the tests are performed, or within the same project. This means, you can integrate TestFLO with any requirements management approach (Agile, Waterfall, etc.) and use stories, epics or formal “Technical specification” issue types created on your own.

The general flow of work

Below you can review a general flow that you can use with TestFLO: 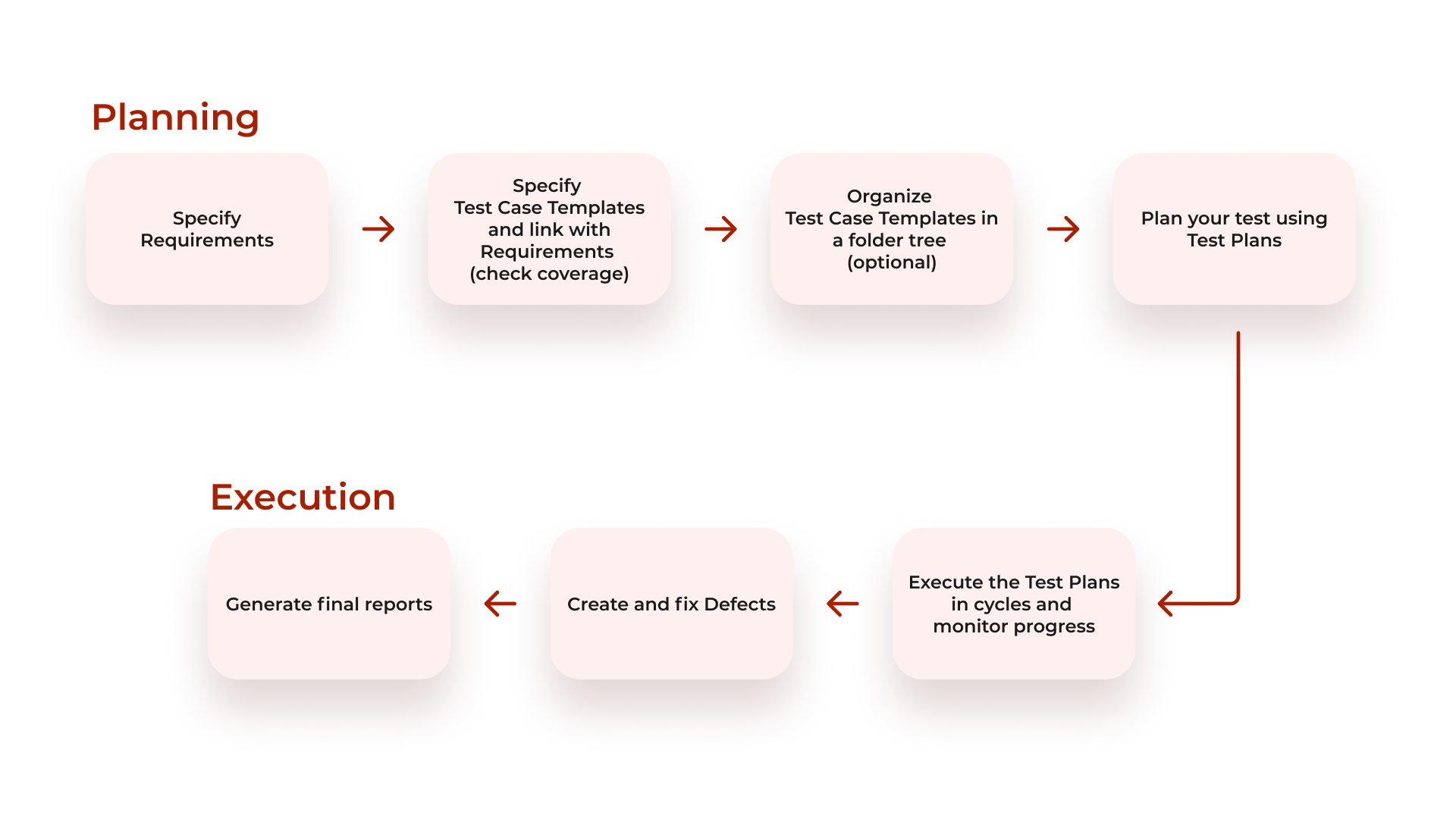 If you need to comply with CFR 21 part 11, then using TestFLO’s permissions you can introduce a test sign-off process if you add Electronic Signature for Jira. This is a good starting point. For more information contact us at atlassian@deviniti.com